My Wordless Wednesday is a picture of one of my favorite drawings my husband did for a client. I just love how he drew the hair and eyes!

My husband does custom drawings on Etsy. A few of scenarios are in our Etsy Shop: Art by Melanie and Claudiu; and, more choices are on our website: Pencil Perfect Art

Mother's Day isn't far off, but if you are interested...he could turn around a drawing in one week and have it shipped a few days following..granting you are happy with what you see...he does make adjustments for clients. We only sell through Etsy for seller and buyer protection purposes. 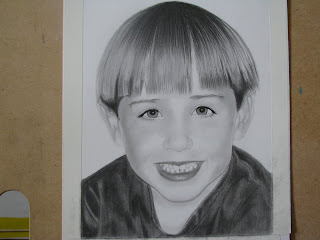 An 8X10 of one subject (like above) head and shoulders...is $45. This is the same price that I have seen many selling Computer/Digital "sketches" of photos. Those are not handmade and are done by a computer. These are hand drawn pieces of original art and take many hours to complete.

Happy Wordless Wednesday!
Posted by Melanie at 3:32 AM 2 comments:

It's getting warmer! Turned the A/C on yet? What Temp?

I am just curious at what temperature most people keep their thermostats in the summer months?

We start off with 80 degrees F and then we eventually have to put it on 78 at some point and that is the lowest we turn it and it does allow us to save on our summer months electric bill.

It is the summer months we do best as we are cold nature people so we like it warm and that helps us on our bills as a result. We always (in the summer months) shoot for $100 or less bill per month. We'll see if we can do it this year.

Things we have done to help to get this bill and be able to stand the "heat."
Ceiling fans in many rooms. And this helps the temperature to feel better by having that cool breeze.
Thick curtains over windows to not allow the house to "heat up" in the first place.

Where we need to go next to continue improvement:
We want to insulate the garage (this will improve the bonus room above's temp which tends to be a very warm room in the summer.)
We also have a few rooms upstairs that still need thick curtains...and since heat rises...yep...long overdue for the upstairs. We still want two more nice ceiling fans: One for the kitchen and one for the guest room. I have debated the kitchen one over and over again...still uncertain.

What temperature do you leave your thermostat in the summer months?
Posted by Melanie at 3:27 AM 2 comments:

I am happy there is an Earth Day, but I try to make every day an "Earth Day!"

In my classroom, recycling is a way of life. When we have "Free Art" I have baskets on each table that is loaded with goodies that would otherwise be trash! To my students...they are like "Wow!" What great stuff!" They always make wonderful creations that they are proud to take home! So creative!

You can do this also with your children! Simple get a box, shoebox or something...and when you are about to toss that scrap string, button, etc...and you think "hmm..this is a shame...it is such a nice...etc...but no use for it, etc.." Think instead...."Can I put this in a box and have my child to make something out of it on a rainy day?" Then put it in that one box that you will keep somewhere easy for you to toss stuff in it. Old flyers, magazines (or favorite pages), shoe strings, twist ties (from trash bags and bread bags), bottle caps (all kinds and sizes), broken toys or missing pieces from puzzles etc... Kids find these things fun to create with. I always have puzzles in the baskets from puzzles from home where several pieces are missing and the kids just love 'em. They might tie string around a piece and color it and make a cool necklace or bracelet or put it in a collage. The list goes on and ideas are limitless. Get the creativity flowing and throw away less. Oh yeah...tissue tubes and paper towel tubes are huge hits as well. Don't forget those cardboard boxes, etc... I use those to cut into Artist Trading Cards (2.5"X3.5") and have kids to do art on those! Great stuff we throw away daily!

Join Nickelodeon's Power Down on Earth Day by turning all your lights off for One Minute! They have a global tracker of all those who pledge to do this. Pretty interesting and it is great to get kids involved.

At young ages, children are Excited about this! It isn't a chore to them. At our school....we have a "day to be green" for every class in the school and they have a section of school yard to "clean" on a certain day. Every class gets a couple turns each year. This takes place on Fridays each week to keep our school yard looking good and keeping our kids aware of the world around them and taking care if it!

Happy Earth Day!
Posted by Melanie at 3:20 PM No comments:

My Etsy Shop...Helping me pay for my Hobbies.

I have had an Etsy account for some time now but not until the past few weeks have I really got into it. I love it!

I have recently listed, in addition to the custom pencil drawings by my husband, knotted jewelry , Crochet Cloths and wall hangings. I made my first sale of my knotted items yesterday! I sold a bracelet! With the exception of the custom pencil drawings, necklaces and wall hangings in our store...most of my items are $5.00 each. I do this, not to make a huge profit, but to pay for my hobby of the items I sell. I love to stay busy and it helps to sell my items to make room for me to make even more. Even better, this pays for my supplies. My husband has sold and made quite a few custom pencil drawings. He is awesome!

If you get the chance...check out my Etsy store! I will be adding items several times a week.

Happy Monday Everyone!
Posted by Melanie at 3:41 AM No comments:

A decent picture taken with our normal digital camera of the moon. 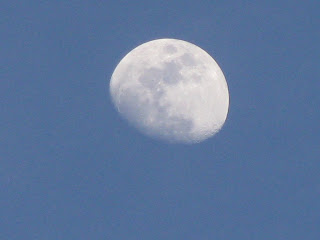 Happy Wordless Wednesday!
Today I will be working on cleaning up our computer area so that hopefully I can become more productive and better with my time.
I am happy to report that our electric bill dropped thanks to the warmer weather by about $50! I am loving the spring time...better moods for everyone with more sun and bills drop. I enjoy the longer days as well...less usage of lights as we love natural light for as long as it lasts each day.
Happy Spring Time everyone!
Posted by Melanie at 4:39 AM 4 comments:

Email ThisBlogThis!Share to TwitterShare to FacebookShare to Pinterest
Labels: photos

If you haven't done your part in filing your taxes yet....there is no more time to waste.

This is your reminder that tomorrow is the deadline!

The Following site does a great job explaining postmarked dates and filing extensions!
GenerationXFinance
Happy Tax Season's End!
Posted by Melanie at 4:17 AM No comments:

Email ThisBlogThis!Share to TwitterShare to FacebookShare to Pinterest
Labels: Taxes

Shutterfly...we thank you! Still the best!

I had to make a post about my favorite photo printing, sharing, products, quality site of my choosing. That site being Shutterfly

! Truly looking out for its customers.

In the current economy, many of the photo printing sites are now requiring customers whom have uploaded pictures (doesn't matter how many) to make minimal purchases in a certain amount of time or pictures will be deleted from accounts. This frightened me so, mainly with Shutterfly

, as they were and are my favorite and house around 1000 of my pictures currently. I had received an email from another photo printing site that I will not mention names that told me the above information and that was okay because I don't have many on their site. Then I started thinking about Shutterfly

and worried that they may also follow by doing this in this economy to boost sales and such.

Well, good news, I also received an email from them stating the opposite...saying they know about other sites doing this practice and wanted to reinsure their customers this would not happen to them, it shall remain the same...free storage, no minimal purchases, no time frame on making purchases, free site for sharing your pictures, etc...the list goes on Shutterfly

I wanted to inform as many as I could that Shutterfly

is the way to go in storing and buying your photos. Let's support these folks that are not taking advantage of the times for personal gains. Thank you Shutterfly

I Should also mention that now is the time to start gathering your pictures for a Mother's Day gift! I made my sis one last year and have already promised her another this year because she loved it so much. I gave one last year to my Mom as well, and she too loves it! :-)
Posted by Melanie at 3:22 AM 1 comment:

Email ThisBlogThis!Share to TwitterShare to FacebookShare to Pinterest
Labels: Discounts and Deals

My apologies for the lack of posting this week. My husband had the flu and now I am getting something. Forgive me as this coming week I may be a bit slow on the posting as well. Can you believe Easter is coming up so soon?

It is spring time and we are all getting to where we want to go on vacations and get out and about. With the current state of the Economy...the funds just may not be there. I, as you may know, am not the biggest fan of credit cards. I do have one...it is our back up only. My card is through my teaching insurance so I found a good deal. (Still don't like it...but at least we have something as a back up source.)

I had some folks to share with me the following sites that allows you to review and compare credit cards and what they offer and rewards and deals and such that some cards come with. It is always best to pay off a card at the end each month in order to avoid those fees. Without further delay...here are the sites for your review:

Credit Card Menu
Posted by Melanie at 7:33 AM No comments: